"Embassy of Musical Mastery": Vienna Concert will be held for the 125th Anniversary of Prokofiev 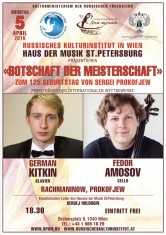