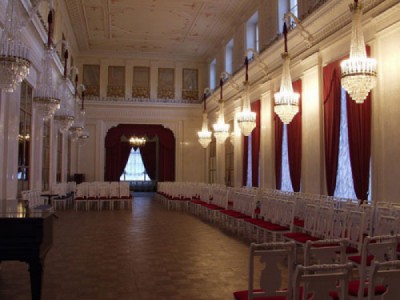 The former mansion of Counts Sheremetev is a unique historical and cultural monument, which represents rare for St.Petersburg pattern of an urban mansion. The site on the bank of the Fontanka was granted by Peter I to the field–marshal Count Sheremetev in 1712. The existing two- storied stone palace was built in 1750 by the architect S.Tchevakinsky. There are also reasons to believe that the sketches by F.–B.Rastrelli were also used. It took two centuries for the mansion to be completed in its development. At different times different architects participated in the decoration of the Palace and its outhouses (F.Argunov, I.Starov, A.Voronikhin, J.Quarengui, Ch.Meier, J.Quadri, I.Korsini, N.Benois, A.Serebryakov and others).

Up to 1917 the Palace and the land had belonged to the five generations of the senior branch - the Counts - of the old Russian family of Sheremetev.. After the Revolution the Palace was turned into a museum and existed as the Museum of Russian Nobility up to 1931. The private collection of the Sheremetev, which they had been gathering for 200 years, served as the basis for the museum's archievs. The collection, complex in its composition, was universal and at the same time versatile. It comprised a picture gallery, a collection of sculptures, arms, coins, samples of decorative and applied arts (among them collections of bronze articles, china, silver, furniture), a library (both music sheets and books; manuscripts, post–cards), church plate and icons (from the Fountain House church), etc.

Later and up to 1984 The Sheremetev Palace premises had been used for the needs of a research institute. The interiors had perished, and the collections had been given over to the major museums of Leningrad and Moscow, except for the few items of interior decoration left in the building.

In 1989 the Palace was handed over to the Museum of Theatre and Music, with the idea of setting up a Music Museum of St.Petersburg and housing the State Collection of Musical Instruments, which also belonged to the Museum of Theatre and Music. Since the 1980's restoration work has been in progress in the Sheremetev Palace, with a view to restoring the gala and memorial interiors of the 19th century. At present the majority of the Sheremetev halls, given to the museum in dramatic state, have been restored. The exhibition is arranged in three directions: a) The history of the Sheremetev family and life of Russian nobility in XVIII - XX cc. b) Open stores of the unique collection of musical instruments c) The exhibition of private collections. The permanent exhibition "The Sheremetev family and the Musical Life of the 18–20th cc." was organized in 1995 in collaboration with the State Hermitage, the Russian National Library, Pushkin House, the State Tretyakov Gallery, the Ostankino Memorial Palace, the Russian Porcelain Museum in Kuskovo, as well as owners of private collections.

Another notable exhibition is a private collection of A.M.Sarayeva–Bondar (wife of V.V.Strekalov–Obolensky - a Petersburg collector). The collection numbering over 700 works of fine and applied arts (18–20th centuries) is one of the most precious recent acquisitions of the museum.

The permanent Musical Instruments Collection displayed at the Palace has three thousand exhibits. "The Open Stores" exhibition opened in the October of 1997 in the Gallery Wing of the Fountain House. Here one can hear the Russian bells, replicas of antique musical instruments, copied in the 19th century from authentic pieces, which had been discovered during the excavations of Ancient Etruria.

The fancy shapes of the baroque instruments of the 17–18th centuries - the old harps, viols, harpsichords- go extremely well with the style of the Palace, the delicate design of the iron railings, the stucco moulding of the interiors. The famous collection, framed by the old baroque architecture, is perceived as a new page in the musical–historical annals of the Fountain House, in which there are the names of famous artists of the past, renowned historians, painters, architects. The museum has become a popular place for concerts. The principal exhibition projects initiated and carried out by the museum: Back in the Homeland open 30 May 2003 The Sheremetev Palace (Naberezhnaya Fontanki, 34; branch of St.Petersburg State Museum of Theatre and Music).