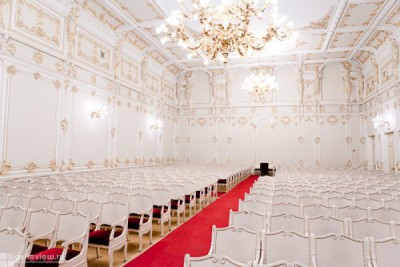 The Small Hall of the Saint-Petesburg Philharmonia is one of the best chamber Concert Halls in the world with first-class acoustics.

The history of the beautiful mansion began in the XVIII century. It was designed by architect B. Rastrelli.  Balls and masquerades took place here regularly. The first Russian Philharmonic Society gave its concerts in this hall.

The world premieres of Haydn's oratorio The Creation (1802) and Beethoven`s Missa Solemnis (1824) occured in this hall.

Prince Vasily Engelhardt became the landlord of this building in 1828.

The architect P. Jacot planned the reconstruction of the building in 1829-30. All the elite of St.Petersburg visited the salon of the Engelhardts. V. Zhukovsky, A. Pushkin, M. Lermontov, I. Turgenev, A Rubinstein, P. Viardo were regular guests at the Engelhardt’s jewel-like house. Such famous foreign musicians as Liszt, Wiek. Szymanowskaya, Talberg, Lipiński gave concerts in this Hall.

Engelhardt’s masquerades were very popular – sometimes even members of the Tsar's family came to the Engelhardt’s house.

The art spirit continued to reign in this hall in the twentieth century. The Small Hall of the St.Petersburg Philharmonia  opened the public on 15th of May 1949 and is named after M. Glinka.

Premiers of works by Shostakovich, Sviridov, Shchedrin, Petrov, Tishchenko and Slonimsky have taken place in the Small Hall. Many International festivals and competitions are organized in this hall.  Listeners and musicians of all ages appreciate the ambience of the Small Hall.