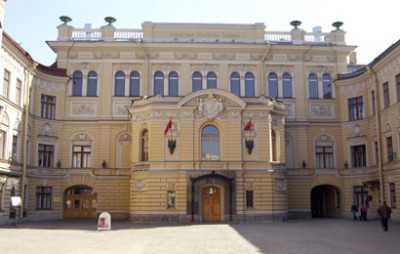 The State Academic Capella of St. Petersburg is the oldest Russian professional musical institution with a history dating back to 1479, when the tsar’s Capella choir of the dyaks founded by the Grand Duke of Moscow, Ivan III, took part in the consecration service of the Assumption Cathedral at the Moscow Kremlin.  The singers were constantly with the Sovereign and provided for the diverse needs of the court: participation in church services, supporting sovereigns during pilgrimages, guest tours and military campaigns, singing at receptions and dinners, during nomination for the tsardom reign, on the Name Days and baptisms.  Besides music, the singers were trained in literacy and science.

On January 1, 1837, upon the initiative of the Emperor, Mikhail Glinka had been appointed chief conductor of the Capella, after having served in it for three years. An outstanding expert in vocal art, Glinka quickly achieved high results in the development of the Capella’s performance skills.

After the October Revolution of 1917, the Symphony Orchestra has been separated from the Capella, to become a basis for the first Soviet Philharmonic Hall, followed by the school (Choral School).  Former royal court choir and orchestra continued with a busy concert schedule.  In 1974, the Capella alumnus, Vladislav Chernushenko, has been appointed the head of the Capella, to return subsequently the oldest Russian choir to its historical standing. In 1991, Symphony Orchestra has been re-established within the Capella, with a team of prominent conductors and performers of modern times cooperating with it.  The Choir and Capella Symphony Orchestra perform on tour a lot with great success in Russia and abroad.

The Saint Petersburg Music House has been performing its Music of the Stars series on the stage of the Saint Petersburg Capella since 2009, after a successful start in 2007 jointly with the Moscow State Philharmonic Hall of the “Stars of the XXI century” season pass series.   Traditionally, the cycle includes 5 concerts with 10 Russia’s young stars in the program, who are the most successful singers of the Saint Petersburg Music House, and the young soloists of the Moscow Philharmonic Hall, performing with the Capella Symphony Orchestra led by Alexander Chernushenko, People's Artist of Russia

Tickets can be purchased in the box offices of: